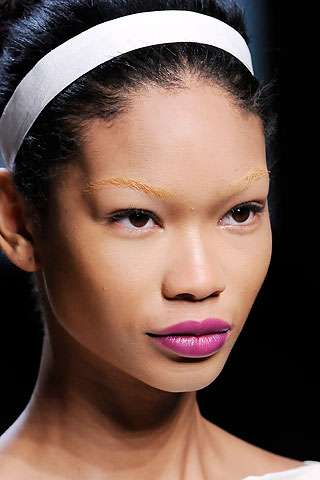 Marissa Liu — September 29, 2009 — Fashion
References: style & allure
At the Bottega Veneta Spring 2010 RTW show in Milan models sported bleached eyebrows in a pale shade of blond to go with their purply fuchsia lips. African-American model Chanel Iman, “felt like [she] was on another planet,” but, “once they dyed them back, [she] instantly felt stronger and more confident.”

The bleached eyebrows or no eyebrows look has been growing ever stronger over the last few seasons. Although Iman was quite vocal about her dislike for the look other models who walked the Bottega Veneta show such as the dark-haired Iris Strubegger and Asian Liu Wen remained mum on the subject. Even light-haired girls like Karlie Kloss were sporting bleached eyebrows on the catwalk, Japanese model Tao Okamoto was the only model spared from bleached eyebrows as she hid behind her thick fringe.
5
Score
Popularity
Activity
Freshness