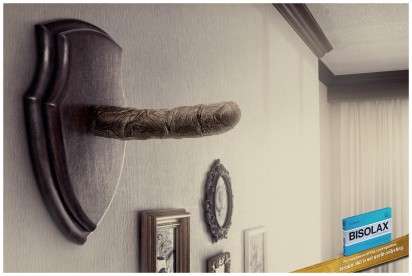 Meghan Young — April 17, 2013 — Marketing
References: kingkongbangkok & ibelieveinadv
Share on Facebook Share on Twitter Share on LinkedIn Share on Pinterest
The Bisolax Laxative-Fecal Softener campaign relies on some hilariously shocking imagery to gain people's attention. It puts pieces of poo in places of honor. Treating them like the trophies they are not, the ad campaign reads, “For treatment of the constipation, because shit is not worth collecting.” Interestingly, this tag line hints at the difficulties of hoarding in general.

Conceived and executed by Kingkong Bangkok, an ad agency based in Bangkok, Thailand, the Bisolax Laxative-Fecal Softener campaign was art directed by Eaknarong Vijittissadee, Athipon Vijittissadee and Lalita Boratisa. From wall-mounted trophies to glass-encased ones, the images were shot by Jeans and Paapniyom. Although the ad campaign might be disturbing to take in, it does send a strong and important message. For people's bowels' sake, hopefully they listen/
5.7
Score
Popularity
Activity
Freshness
View Innovation Webinars