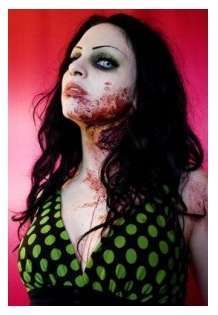 'Dead Set' in the UK

Called Dead Set, it is an original, five-part drama written by Charlie Brooker. It is set in a fictional Big Brother house at a time when the country has been overrun with zombies. The contestants are apparently “blissfully unaware” of what is happening in the outside world, until eviction time, that is. Their greatest fear? Not being on television any more…