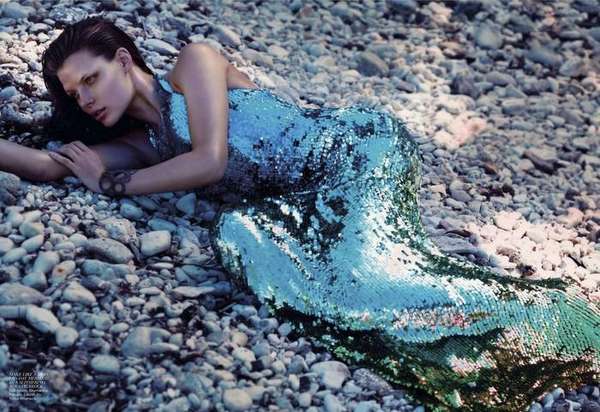 The Beyond The Sea Flare Magazine Editorial is Couture-Clad

Bekah poses shore-side and in the water, sporting a series of fish scale resembling fashions. Styled by Flare editor Elizabeth Cabral, the model is dressed in a bevy of designer selects from labels that include Brose, Calvin Klein Collection, Marc Jacobs and The Blonds among others.

Blinged out and bedazzled, Bekah sports iridescent and lustrous textiles, scale-mimicking sequins and eye-catching accessories. Channeling a fashionable mermaid, the model's look is completed with slicked-back hair and natural makeup by Simone Otis. The 'Beyond the Sea' Flare Magazine editorial washes up with style. Captured on a beautiful beach setting, this oceanside fashion story is one to remember.
6.5
Score
Popularity
Activity
Freshness
Get the 2021 Trend Report FREE