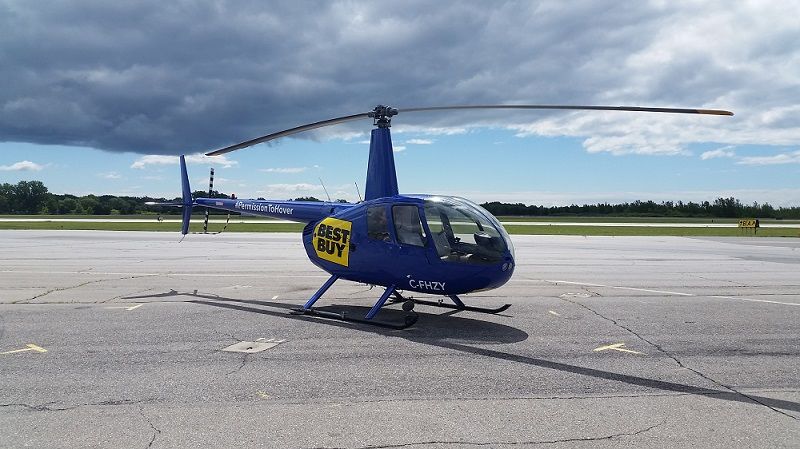 Taylor Keefe — August 17, 2015 — Marketing
References: bestbuy
Share on Facebook Share on Twitter Share on LinkedIn Share on Pinterest
Last week, Best Buy Canada launched a new campaign called #PermissionToHover, a program aimed at helping parents better understand the technology used by their kids. The program specifically highlights 'helicopter parents' - accused of being too involved in their children's lives - as they gear up for the back-to-school rush.

To bring the campaign to life, Best Buy tapped influencers and media to help promote the initiative by taking them on our own personal helicopter tour of Toronto alongside blogger and self-proclaimed helicopter parent Rebecca Keenan.

Keenan said that while she does have helicopter parent characteristics, she generally likes to be aware of what her kids are up to, especially with technology. "[Technology] is a crazy market. It's full of jargon, it seems like there's something new each day. And if you're not really a pro who is following the industry, are you really on top of what's out there? Parents often let their kids be the guiding force when it comes to tech, and they may know what's cool, but they don't necessarily know what the best tools are to help them learn."

Also on hand was Best Buy Canada's communications manager and resident tech-expert Elliott Chun, who said "the goal here today is to have fun with the helicopter parenting phenomenon. It's not a bad thing, it's actually something that parents can appreciate because technology is so confusing. For Best Buy and Geek Squad, we're here to help them translate through all of the clutter."

"Back-to-school is a big time of year for us," said Chun. "We want to be the go-to destination for parents and kids when preparing for a new school year."