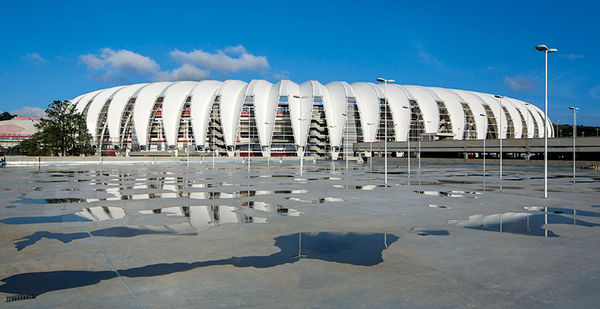 The Beira-Rio Stadium Receives a Revamp by Hype Studio

Jamie Danielle Munro — June 13, 2014 — Lifestyle
References: hypestudio.br & designboom
The Beira-Rio Stadium received a revamp by Hype Studio, characterized by massive steel trusses that rise up from the ground surrounding the building and climb all the way to the roof.

The steel trusses have a white exterior, which is mainly what people can see when walking up to the place. Other improvements were also made to the building, including putting in more VIP rooms, a shopping center as well as a museum. Considering how many people will be moving through the area for the World Cup, it makes sense to ensure that the stadium is spruced up to its best abilities. Hype Studio recently completed this just in time in the month of April 2014.