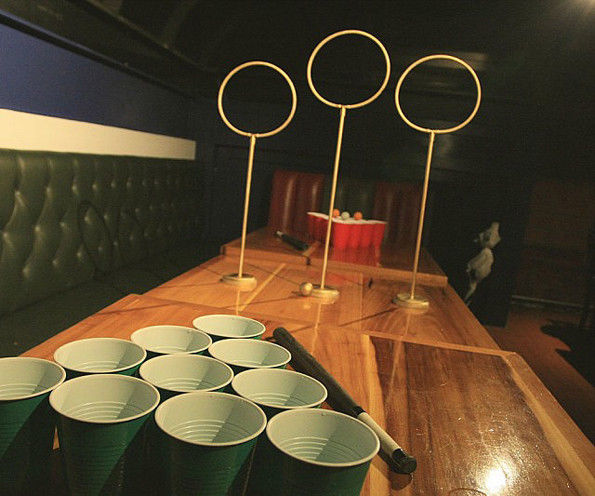 This Quidditch-Inspired Beer Pong Set was Created for Muggle Players

Alyson Wyers — April 30, 2015 — Lifestyle
References: unofficialquidditchpong & incrediblethings
Share on Facebook Share on Twitter Share on LinkedIn Share on Pinterest
If you love Harry Potter and drinking games, you need this beer pong set. The Unofficial Quidditch Pong Set combines the wizard sport typically played on flying broomsticks with beer pong. However, it's designed with muggles in mind, so no broomsticks are involved, just the three Quidditch hoops, two beater bats and one golden snitch. The quaffle and bludgers are replaced with three of your standard ping pong balls as well.

If you have never played this adapted version, the site that sells the beer pong set also has rules up explaining the game. However, they are really just recommendations, so you can change the rules to better manage your alcohol-fueled mischief. Of course, you could also play with non-alcoholic butterbeer.
1.9
Score
Popularity
Activity
Freshness
View Innovation Webinars