Top 75 Mobile Trends in February
Next
Set of
Related
Ideas 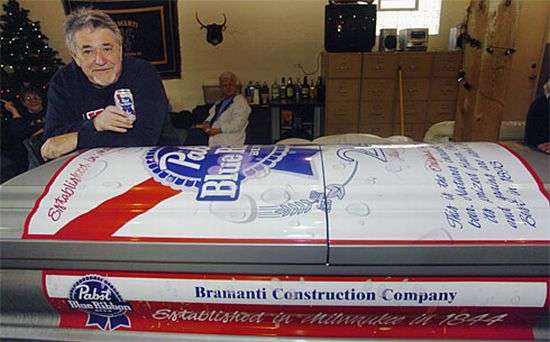 This coffin was designed for Bill Bramanti of Illinois who happens to be a major Pabst Blue Ribbon connoisseur. He loves the beer brand so much, he had this coffin created to resemble a can of it.

"At 5-feet-9 inches tall, this beer can coffin weighs a cool 280 pounds," BornRich says. "The silver coffin is designed with red, white and blue, just like a Pabst can. The beer lover might have his own plans to depart in this coffin, but for now, he is using this giant beer can coffin a s a cooler and he has already thrown a party for his friends, featuring his coffin filled with ice and yes, the Pabst Blue Ribbon."

Any real red neck would die for one of these...
3.6
Score
Popularity
Activity
Freshness
Attend Future Festival