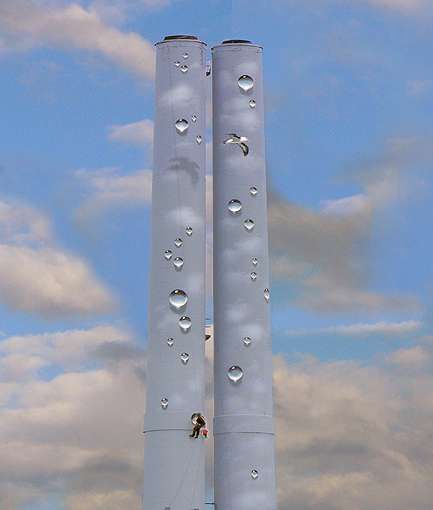 Striking Beauty in the Paris Suburbs

Elsa Blaine — July 3, 2008 — Eco
References: gracia.club.fr & deputy-dog
Share on Facebook Share on Twitter Share on LinkedIn Share on Pinterest
The chimney stacks of a heating building in Bagnolet, an eastern suburb of Paris, have been transformed into a stunning work of art, thanks to artist Frederic Gracia. Gracia beautified the twin chimneys using a traditional method of painting called trompe-l’oeil which, when translated from French, means to ‘trick the eye.'

The artist hung suspended at heights of up to 155m and was guided from the ground by helpers with walkie-talkies and binoculars. Great precision was required to make the water droplets, the largest of which was 1.1m in diameter, appear as real as possible against his curved canvas. Hampered at times by violent wind and rain, the project took two months to complete. Apparently even at night the luminescence of the painting is visible from the nearby highway. I love the flying seagull and its shadow on the neighbouring chimney.

Also shown here are some previous works by Gracia, illustrating his passion for drops of water.
3.2
Score
Popularity
Activity
Freshness
Get the 2023 Trend Report FREE