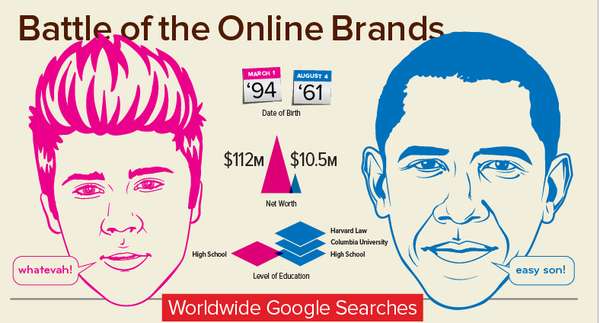 The 'Battle of the Brands' Infographic Compares Bieber vs. Obama

Jennifer Gosnell — July 12, 2012 — Pop Culture
References: hingemarketing & infographicsite
Share on Facebook Share on Twitter Share on LinkedIn Share on Pinterest
The Justin Bieber vs. Barack Obama 'Battle of the Brands' infographic takes a look at the name vitality of both mega-famous people. In Obama's case, as a political figure and President of the United States, he has an obligation to stay engaged with the public and has received a lot of support as a result through his social media platforms.

On the other hand, Bieber has gained more popularity than the President of the United States. The infographic compares the net value, Google search results, social media followers, shopping results and hairstyles for each.

In one of the more hilarious areas of the graphic, the quality of their Twitter statuses is evaluated with Obama tweeting, "We are a nation of Google and Facebook," while Bieber Tweets, "If I was your boyfriend I'd never let you go #Real."
3.6
Score
Popularity
Activity
Freshness
Access Advisory Services