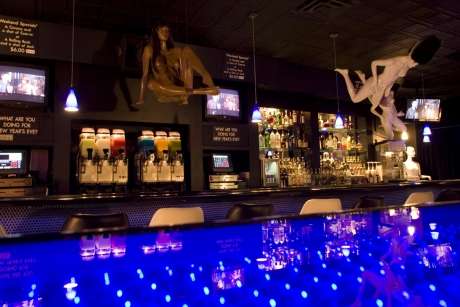 lourdes sanchez bayas — July 7, 2008 — Art & Design
References: korovamilkbar & blogarquitectura
Share on Facebook Share on Twitter Share on LinkedIn Share on Pinterest
If you're familiar with the 1971 ultra-violet, over-indulgent, satirical science fiction cult classic film A Clockwork Orange directed by Stanley Kubrick, you will remember the Korova Milk Bar: this is the name of the establishment psychopath delinquent Alex Delarge and his friends frequented to get high on milk spiked with psychotropic drugs.

Now, a bar-restaurant located in White Plains, New York has decided to pay homage to the disturbing film by decorating the place to closely resemble the flamboyant, extravagant schemes of the bar in the violence-ridden film.

The Korova Milk Bar in A Clockwork Orange stood out for its eerily futuristic decor punctuated by milk-dispensing, life-sized, white plastic dolls which were all over the place. The freaky video we're showing comes from the film.

The name of the establishment in White Plains is, predictably, Korova Milk Bar. Korova means â€œcowâ€ in Russian.


This is another bizarre bar inspired by the movie â€œAlienâ€