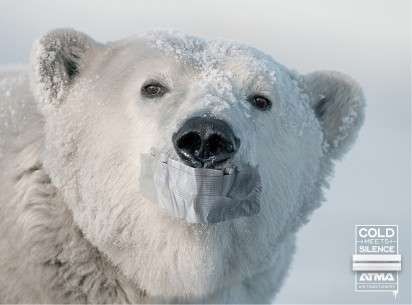 Meghan Young — March 16, 2012 — Marketing
References: tbwa & ibelieveinadv
Share on Facebook Share on Twitter Share on LinkedIn Share on Pinterest
At first, the ATMA Air Conditioners campaign looks like an animal rights ad. It cleverly grabs people's attention with images of seemingly mistreated animals. However, the ad campaign actually illustrates one of the main assets of these air conditioners: they cool down rooms in silence. Hence the duct tape over the mouths of common winter animals such as polar bears and seals.

Conceived and executed by TBWA, an ad agency based in Buenos Aires, Argentina, the ATMA Air Conditioners campaign is quite adorable, once the initial shock of seeing these muzzled animals fades away. It takes a literal stance to a basic statement: "Cold Meets Silence."