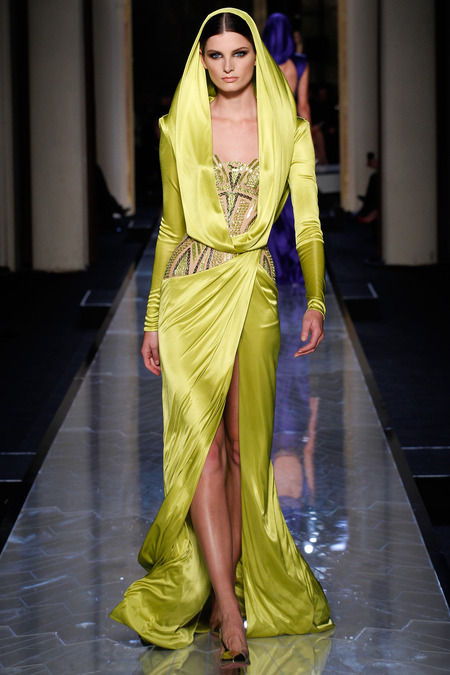 The Atelier Versace Spring 2014 Couture Show is all About Grace

Ashley Noelle Lesiak — January 23, 2014 — Luxury
References: versace & style
Share on Facebook Share on Twitter Share on LinkedIn Share on Pinterest
Grace Jones was the driving force behind the inspiration at the Atelier Versace Spring 2014 Couture show. When Donatella was asked about Jones, she said "She left a sign as a strong, powerful woman, a power goddess." If you don't know who Grace Jones is, you are missing out. She was a model, singer and actress in the 80s and she had a fiercely androgynous look to her.

Not only did Jones look interesting, her style was also ferocious. She was most known for wearing dresses that had hoods attached to them. The inspiration is strikingly apparent in this Atelier Versace Spring 2014 Couture collection, which features multiple iterations of hooded dresses in various hues and cuts. Most of the dresses are long and slashed, draping down the body and casually exposing some of the wearer's chest.
5.2
Score
Popularity
Activity
Freshness
Get Trend Hunter Dashboard