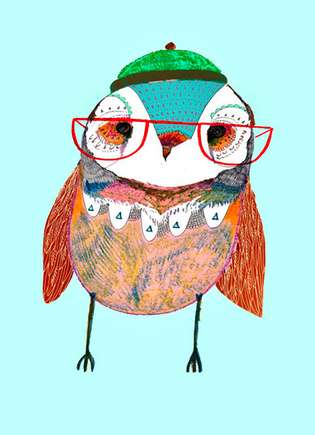 Courtney Scharf — May 7, 2012 — Pop Culture
References: etsy & honestlywtf
Share on Facebook Share on Twitter Share on LinkedIn Share on Pinterest
Owls, the much loved night breed, have really moseyed their way into fashion over the past few years, as demonstrated with these prints by Ashley Percival. Consequently, it's no surprise that the nocturnal creatures would influence the art world. Percival, who is based in England, has caught the eye of bloggers with her whimsical hipster owl paintings.

Cute and a little bit satirical at once, the owl prints are created using multiple mediums, including watercolors. The creatures depicted in the pieces are not only bright, but also feature several graphic patterns. Sporting ironically colorful wool sweaters, blank stares and large glasses (not prescription), these owls are quite clearly influenced by the current fashion aesthetic.

The talent, Ashley Percival, has her own Tumblr featuring her work and sells many of her prints on Etsy.