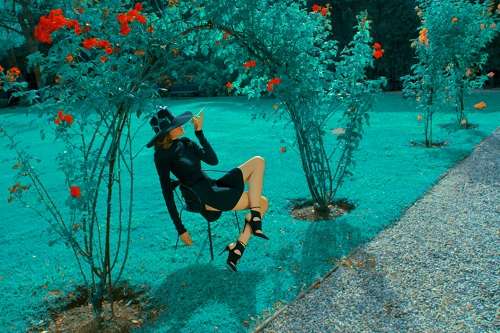 A coy, debonair aristocratic woman is photographed crawling through a bushel of hedges into a land of greenery, red roses and chic female guards. Similar to the story of Alice in Wonderland, the Aquazzura Shoes FW 2012 campaign showcases a mystically intriguing land. It is beauty and absolute chaos all in one, which is shown with the mirrored photos of beautifully heeled female legs. The model basks in her surroundings, sensually showing off red suede heels as she playfully lounges in a flower bush.

Diego Diaz Marin entices and envelops his audience by not showing the model’s face. The shoes and sneaky unidentifiable girl crawling across the fresh green lawn make this campaign irresistible.