AntWorks: The Real Alien Ant Farm and Your New Pet 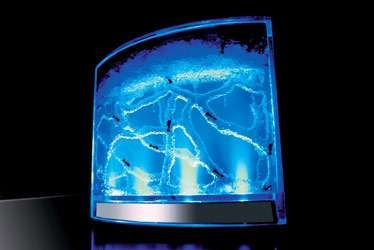 “AntWorks™ is based on a 2003 NASA Space Shuttle experiment to study animal life in space and test how ants successfully tunnel in microgravity.

The AntWorks™ Gel is complete with nutrients to promote healthy growth in the new colony.

Watch ants live, work and tunnel in the nutritious and non-toxic gel as they create series upon series of intricate tunnels.

Easy to care for - Ants need NO food or water.” - Faschinations.com

Ants are fascinating creatures. Look at the ground on a fairly nice day, and chances are you’ll see several scurrying around. The ants we interact with in everyday life tend to be scouts or foragers. The colony, with its impressive and complex tunnel system, remains hidden underground. Visible ant habitats, such as the Ant Farm® product (Ant Farm® is a registered trademark of Uncle Milton Industries, Inc.), provide insight into the lives of these amazing insects. Ant Farm® habitats enable viewers to peer into the mysterious world of ants and how they tunnel. Usually made of two panes of glass (or clear plastic) and filled with sand, Ant Farm® habitats and their ilk allow a micro colony of ants to be put on display in a home or office. As ants tunnel in the sand, viewers are able to witness a network of tunnels develop before their eyes. Ant habitats using sand may also be created using glass canning jars, and the like. Because you can’t really see through sand, the visible tunnels are pretty much limited to those next to the outside wall. Another important detail about sand and soil based ant habitats – they don’t like to be moved. Shaking, whether from a strong earthquake or human-made, can cause the tunnels to collapse – an Earth-shattering cataclysm, at least from the ants’ perspective. This posed quite a problem for the scientists at NASA, which resulted in an ingenious solution.

The Gravity of the Situation

Gravity is a great indicator of direction. While we may not be certain which way north is without a compass, up and down can always be determined. To what degree, scientists wondered, do ants use gravity in creating their tunnel network? If an ant colony were in a zero-gravity (technically, ‘micro-gravity’), environment, would they know to tunnel down – and how complex would their tunnels be? NASA had been planning experiments around ‘life in space’. The long-term goal, being to discover how certain species react to a micro-gravity environment. Would ants tunnel downward? Would spiders spin webs? These are some of the questions NASA set out to answer.

The Problem and a Creative Solution

Containers for various forms of life were developed for space flight, however a ‘cosmic colony’ of ants posed a unique puzzle. With a soil/sand-based habitat, NASA and the Space Shuttle crew had two, equally problematic options. If ants were added to the habitat prior to take-off, the tremendous G-forces would collapse any tunnels, killing the ants. Trying to add ants to the habitat in a weightless environment might make for an entertaining ‘bloopers’ video, but would be counter-productive for research. Even if this could be done without the Space Shuttle hosting several rogue floating ants, the tunnels would still collapse from the shaking caused during re-entry. It became clear that NASA needed a habitat ants could live and tunnel in, that could withstand a significant amount of shaking. A special gel material was created which would serve as a tunneling medium for the ants, as well as a nutrient source. AntWorks™ is based on this technology.
5.5
Score
Popularity
Activity
Freshness
Access Advisory Services