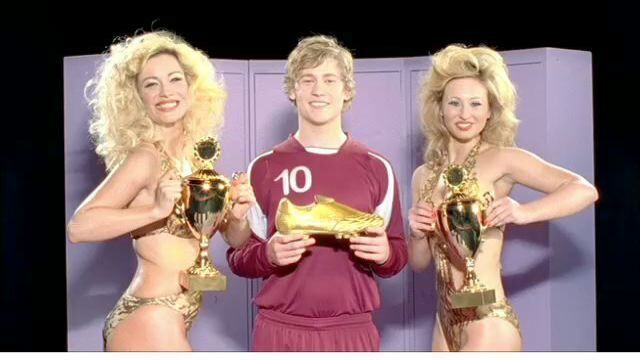 Ed White — April 3, 2008 — Marketing
References: youtube
Share on Facebook Share on Twitter Share on LinkedIn Share on Pinterest
In the world of multi-million dollar, celebrity-endorsed sports marketing (yes, that means you Nike and Adidas) performance is something that's actually surprisingly overlooked in favour of glossy but ephemeral brand 'values'. Step (or should that be run?) forward Nomis, a tiny Australian football boot maker set up by Simon (Nomis backwards spells:?) Skirrow, former Adidas designer and he who dreamed up their best selling Predator boot. Focusing on performance and comfort the boot is a statement against the new breed of ultralight boots that do little to protect footballers feet (utter the words 'metatarsal' and 'Rooney' to any English football fan for a feather-spitting diatribe on the subject.)

A marketing minnow (in terms of budget and recognition) in a pond full of some very, very big fishes, agency Johannes Leonardo (set up by former Saatchi whizzkids Jan Jacobs and Leo Premutico) set out on some advertising asymmetric warfare. Taking a swipe at the big boys with an anti-hype anthem of an ad, â€œDem Bootsâ€ spins a lavish modern fable about the perils of big name boots, to a jaunty reworking of the classic â€œDem Bonesâ€.

But there's more. The agency also created special pop-up stores where prospective buyers can take home and try on the boot versus their own footwear. If they like it they can buy the other shoe, if not, well that's up to them. The first such store is in Berlin, opposite, fittingly enough, the adidas store. There's even a sneaky trail of footprints taking you from the adidas store to the Nomis store. Guerilla marketing indeed.