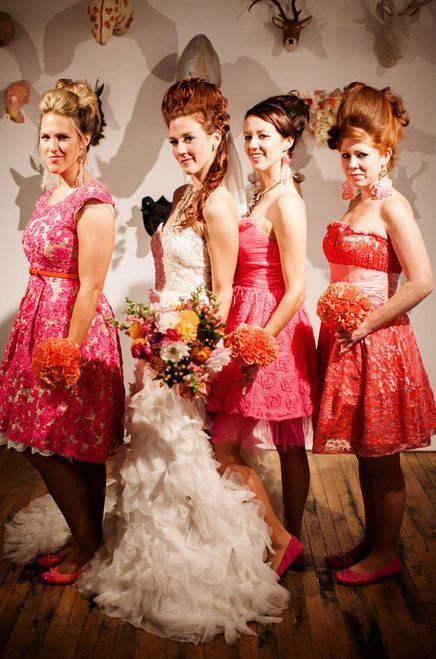 Laura McQuarrie — January 13, 2014 — Lifestyle
References: jacoblarue & rocknrollbride
Share on Facebook Share on Twitter Share on LinkedIn Share on Pinterest
Newlyweds Neil and Jesse went for an animal-themed wedding that was a cross between Wes Anderson and Darwin’s Study. On their first date, the couple saw ‘The Fantastic Mr. Fox’ together and so began the elaborate animal theme that was carried though personalized boutonnieres to represent each man of the wedding party to the bride’s feathery dress and intricate cuckoo clock-like cake.

The couple was hoping to rent some taxidermy for their wedding day, but found it challenging and instead, made do with their own taxidermy animals made out of fabric, cardboard and plaster—which turned out to be far more charming than the real things.

As a hands-on bride, Jesse made a ton of the decorations for the venue herself, including fabric garlands, chandeliers and thousands of cut-out paper flowers, which transformed the gallery space into a whimsical woodland for their wedding.
4.3
Score
Popularity
Activity
Freshness
View Innovation Webinars