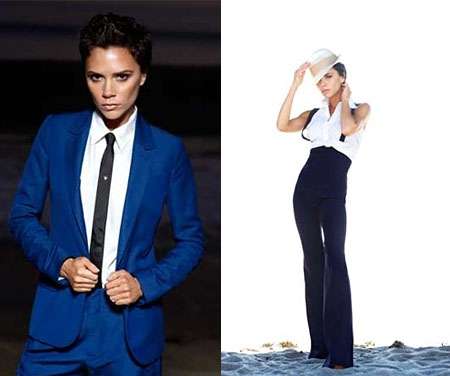 True to her feminine nature, however, the rest of the shoot shows her womanly side in gorgeous white gowns which, when paired against the tropical paradise in the background, looked much like wedding gowns.

Although the intention of the editorial was to promote the foofy dress line, the royal blue Gucci suit which was paired with a Dior Homme tie was far more captivating.

Victoria Beckham revealed a little about her life as a designer in The Times.

"Do I draw? No. Then again, nor do lots of designers. But I put it all on myself and walk around in it, and I know what feels comfortable," she said. "I know how a dress should sit. I've worn so many and when I see the photographs I think, crikey, my boobs are up round my neck again because the corsets are too short and not cut high enough."

Wow, this designer business sounds like a pretty chic job, but does she have the business knowledge?

"In these recessionary times, and at these prices, women are looking for something that will be an investment, aren't they?"

Check out some more of the androgynous look that attracted you to this article below.
5.8
Score
Popularity
Activity
Freshness
Get the 2021 Trend Report FREE

Overalls All Over
Suspended Styles