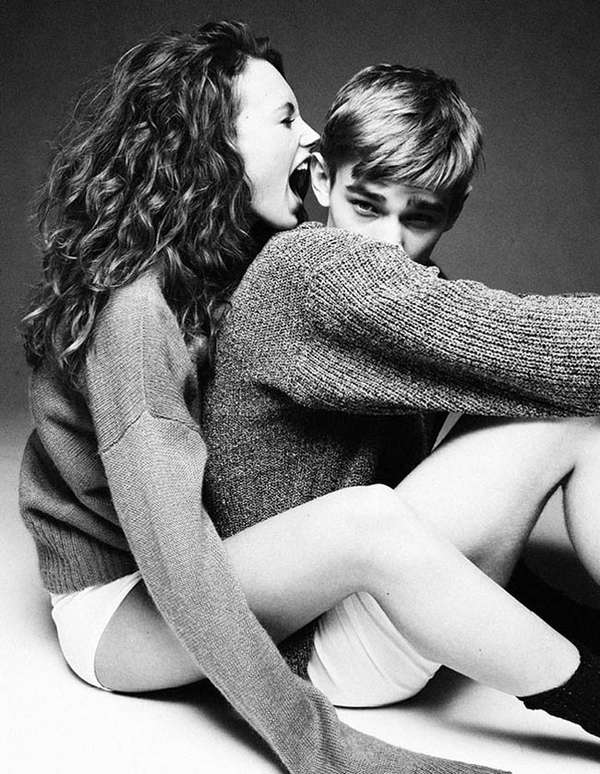 In this editorial, Andreas Ohlund captures Mona Johannesson as she teams up with 16-year-old (!) male model Bo Devellus and they pose in a series of sexy but innocent-seeming shots that feature the two Swedes sharing big, furry mom-like sweaters with aplomb. Andreas Ohlund's monochrome shoot does a good job of highlighting accentuating the angular bone structures that make Johannesson and Devllus two of Sweden's most in-demand models.

The editorial is another feather in the cap for Andreas Ohlund. His work has appeared in advertisements for H&M and H&M Chanel and he has shot notable celebrities like Sweden's own Lykke Li, and famed New York gangster and the basis for Denzel Washigton's "American Gangster" character, Frank Lucas.

Implications - One of the most effective ways a company can garner attention for its brand is by featuring subtle sexuality in their marketing. By highlighting sexual elements without making it abundantly clear that's what they're doing, the company strikes a chord with fans of subversive humor and marketing, and it shows the company is willing to combine understated tactics with envelope-pushing material.
3.3
Score
Popularity
Activity
Freshness
Access Advisory Services