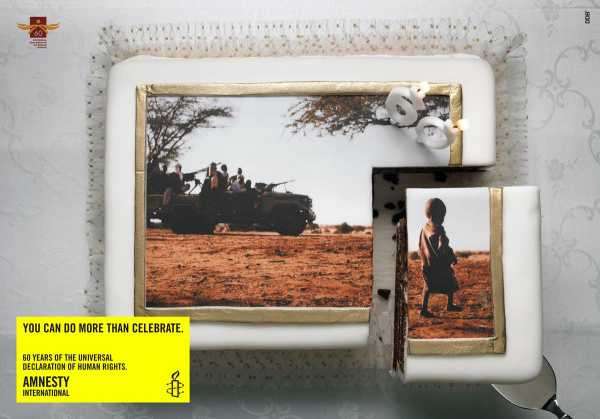 Vincent Salera — February 1, 2009 — Marketing
References: amnesty.org & coloribus
This Amnesty International ad is awesome on a number of levels. It’s intended to celebrate the 60th anniversary of the human rights organization, and the ad depicts a symbolic printed cake.

On each of the Amnesty International cakes, a slice is being removed from the rest of the cake, visually separating a person from an unacceptable, unsafe situation. The tagline of the ad reads, “You can do more than celebrate. 60 years of the universal declaration of human rights.”

I can not say enough great things about these ads. You certainly know an ad is successful when the message you want to communicate needs no words. The ads were created by advertising agency DDB Budapest, Hungary with creatives Rodrigo Fernandes, Guilherme Somensato, Giovanni Pintaude, Laszlo Hevesi, and Marcell Patkai. The captivating photos were taken by Gabor Mate of Corbis.
4.3
Score
Popularity
Activity
Freshness