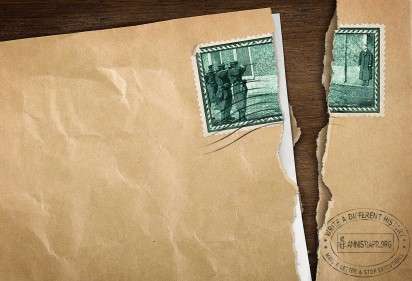 Meghan Young — February 20, 2012 — Marketing
References: ddb & ibelieveinadv
Share on Facebook Share on Twitter Share on LinkedIn Share on Pinterest
Words are incredibly powerful, as any existing history book can attest to, so the Amnesty International 2012 campaign urges people to use their own to help humanity stay true and strong. Instead of following the footsteps of events that have already been written, the ad campaign states simply, "Write your own history."

Conceived and executed by DDB Latina, an ad agency based in Guaynabo, Puerto Rico, the Amnesty International 2012 campaign challenges the death penalty, domestic violence and child soliders. The powerful posters center around three stamps that depict those occurrences. They have been strategically torn so as to separate the victim from the his or her attacker.