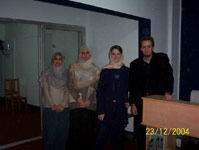 Growyourbeard — October 29, 2007 — Social Good
References: arabicinegypt
Many American Muslims seek to increase their Islamic knowledge in order to clear misconceptions about their religion.

They are increasingly traveling to Egypt to study in places like the Cairo Institute for Arabic Language Sciences. There they learn the Arabic Language, history and culture through immersion. Egypt has become the #1 choice for Arabic learning among American Muslims because of its cheap living expenses, safe streets and rich culture.

Implications - Perhaps America will incorporate new Muslim educational centers in the near future in order to accommodate this growing population. America is a multicultural country, but in order to sustain this it is necessary to support these various cultures. Although American Muslims feel the need to venture to far off lands as of now, hopefully America will show more support in the near future.
0.8
Score
Popularity
Activity
Freshness