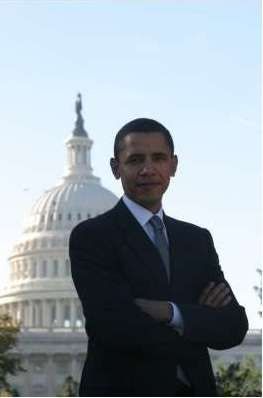 Sandra Winn — November 5, 2008 — Social Good
References: trendhunter
Share on Facebook Share on Twitter Share on LinkedIn Share on Pinterest
Being elected to the highest office in the USA is a magnificent achievement in and of itself, but this year is remarkable because our 44th President of the United States is Barack Obama, America’s first Black or as some say, “Multi-Racial” President.

President elect Barack Obama slam-dunked the election within just a few short hours of polls closing across the nation with a whopping majority of electoral votes. For Senator McCain, who gave an awesome fight, the math for even coming close to achieving such wasn’t there.

President Barack Obama, born August 4, 1961, entered into the world during the seventh year of America’s Civil Rights Movement and just six years after Rosa Parks refused to give up her seat to a white person in the front section of a “colored bus.” Here we are 47 years later, in what must have seemed a lifetime of anticipation for those in the black community, yet a mere blip on the scale of history as a whole, with a black man holding one of the most powerful, honored, and respected positions in the world.

Barack Obama, President of the United States of America, overcame accusations of not having enough experience, hating whites, being a far left-winger who “pals around with terrorists,” of being a socialist because of his “spread the wealth” remarks, not having a proper birth certificate, as well as agreeing with radical views expressed by many of his past and present associates including one of his most admired mentors, Reverend Jeremiah Wright.

Barack Obama showed the American people, as well as the rest of the world, that he wasn’t afraid to know people who expressed different views without sacrificing who he is and what he believes and stands for.

More importantly, President Obama reached across racial and economic lines with promises of hope and change for all American citizens.  The discussions from political commentators speculating that he would have problems with white voters were practically non-existent.

His charismatic personality, intelligence, youthful vibrancy and forthrightness captured the hearts and trust of American constituents regardless of their ethnic and racial backgrounds.

President Obama’s qualities, combined with a “lame duck” presidency, filibustering congress, and fledgling economy resulted in there being an unprecedented voter turn-out; the majority of which voted in his favor and propelled him to victory.

Between mega-millions being spent on campaigning by both parties, an escalated amount of voter registration and record turn-out, a Black male presidential nominee and female Vice Presidential candidate, 2008’s bid for the White House was already of historic proportions - even if Senator John McCain and Governor Sarah Palin were the victors.

I am both a proud and fortunate American today.  To be part of history in the making and thrilled to see that America has come so far in the area of racial equality—though not perfect. When Barack Obama officially swears in as President of the US on January 20, 2009, history will be marked three-fold; (1) We will have America’s first Black (multi-racial) President, (2) America’s first Black lady, and (3) When President Obama, Michelle, and their daughters Malia Ann and Natasha “Sasha” cross over the threshold of the White House doors, America’s first Black Family.

...I say to you today, my friends, that in spite of the difficulties and frustrations of the moment, I still have a dream. It is a dream deeply rooted in the American dream.

I have a dream that one day this nation will rise up and live out the true meaning of its creed: “We hold these truths to be self-evident: that all men are created equal.”…

Dr. Martin Luther King, it is with a lump in my throat and pride in my heart that I say that your dreams and visions for this nation have come true.
4.2
Score
Popularity
Activity
Freshness
Get the 2021 Trend Report FREE