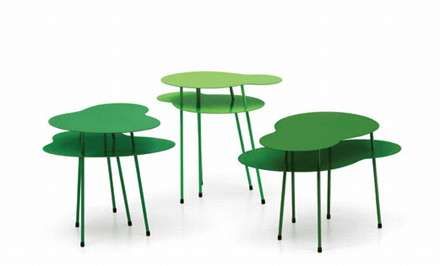 The concept of the Amazonas table series originated when Finnish designer Eero Koivisto saw aerial images of the rain forest where tree crowns created a dense ceiling - so many trees forming a whole. Accordingly, he set out to create a table with the same effect. Actually several such tables that could be combined to form a cluster.

Amazonas is a small, highly functional table that can be used individually or several can be combined for a bigger table. Each set consists of three tables in three different shades of green, and can be arranged so they partly overlap.

The table's irregularly placed five legs give it an artsy sculpture look. The idea of the legs comes from tree trunks in the rain forest, which grow in random directions.

Koivisto describes the process, "when I was creating Amazonas I was thinking a lot about environmental issues. As a designer, one can try to create an environmentally sustainable product that people don't want to throw away. That is why Amazonas is a mono-material - in this case steel - that is 100 per cent recyclable."

About 10 Euros are donated to the Swedish NGO Children's Rainforest for each sold set.
2.3
Score
Popularity
Activity
Freshness
Get the 2023 Trend Report FREE

Circular Modernist Chair Designs
The 'Zero.Gravity' Chair by AN.ONYMOUS Has a Range of Seats