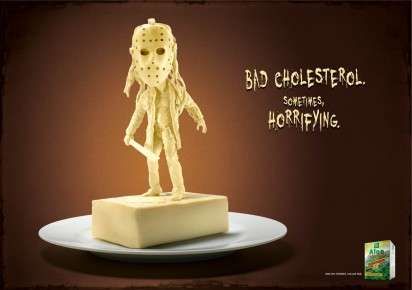 Meghan Young — November 14, 2012 — Lifestyle
References: alch1m1a & ibelieveinadv
Share on Facebook Share on Twitter Share on LinkedIn Share on Pinterest
Sometimes bad cholesterol can be as scary as the villain in a horror movie, like those featured in the Aloe Cholestop Bioenergy Nutrition ad campaign. Sneaking up on the least suspecting and, often times, killing them, bad cholesterol is the stuff of nightmares. In fact, Jason Voorhees from 'Friday the 13th, Jigsaw from 'Saw' and Ghostface from 'Scream,' have nothing on it since they are all fictional.

The Aloe Cholestop Bioenergy Nutrition ad campaign fights this food villain. Conceived and executed by Alch1m1a ADV, an ad agency based in Milan, Italy, it reads, "Lower your cholesterol. Love your body." By taking this medication, that is exactly what people will be doing instead of dying a horrible death.
3.5
Score
Popularity
Activity
Freshness
Attend Future Festival