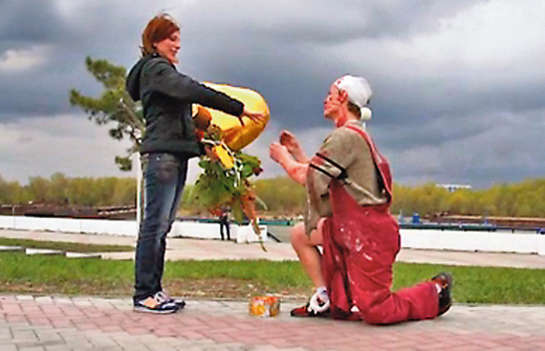 Meghan Young — September 6, 2012 — Lifestyle
References: huffingtonpost & neatorama
30-year-old Alexey Bykov of Russia had a lot to prove when it came to his unique marriage proposal. Most importantly, he wanted his future wife-to-be to realize how much he meant to her before popping the questions, perhaps even sneaking a peak at her reaction to see if she even cared. Basically, in an elaborate scheme, Alexey Bykov faked his own death before proposing to the girl of his dreams.

Hiring a movie director, stuntmen, make-up artists and a script writer to stage a tragic car crash scene, Alexey Bykov reveals, "I wanted her to realise how empty her life would be without me." When she arrived to the accident only to learn that Alexey Bykov was dead, she broke down just as he expected. Thankfully, there was a happy ending to this strange story.
5.7
Score
Popularity
Activity
Freshness

$15, 000 Marriage Proposals
A Man in China Amplifies Romance with the Dancing Carrots Proposal