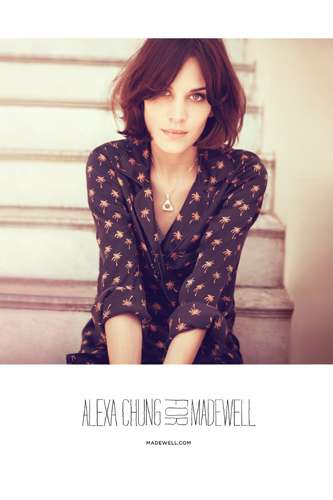 Souzan Michael — August 25, 2011 — Pop Culture
References: stylenews.peoplestylewatch & fashionista
Share on Facebook Share on Twitter Share on LinkedIn Share on Pinterest
Alexa Chung is known in Britain as a popular television personality, but to the rest of the world, she is an inspiring and unique style icon, so it seems only fitting that the Alexa Chung for Madewell Fall 2011 collection is anything but ordinary.

After the immense success of Chung’s first collaboration with Madewell last year, resulting in everything flying off the shelves immediately after it hit stores, it seems natural that the pair decided to release a second collection together.

The Alexa Chung for Madewell Fall 2011 line is full of “heavy inspiration of girls in bands who live their looks,” according to the press release for the collection. The photo shoot for the line was shot in Austin, Texas, and is meant to depict the feel of a road trip, perfectly reflecting Alexa’s rock and roll, downtown style.

Look for the Alexa Chung for Madewell Fall 2011 collection to hit stores and online on September 22.
4.6
Score
Popularity
Activity
Freshness
Get the 2021 Trend Report FREE