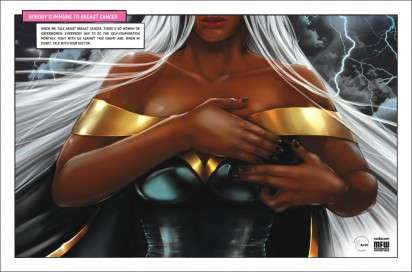 Meghan Young — December 15, 2011 — Marketing
References: ddb & ibelieveinadv
The ALCC Vodacom MFW campaign shows that even the strongest women can be in danger of developing breast cancer. If Wonder Woman and Storm take precautions by performing routine breast examinations, then that means every woman should be doing it as well.

Conceived and executed by Maputo-based ad agency DDB, the ALCC Vodacom MFW campaign really connects with all women, especially the younger generation that often feels as invincible as the superheroes portrayed in the print ads. Clever and concise, the ads were illustrated by Maísa Chaves and portray a powerful message.

Although the comic book has influenced many print ads over the years, the ALCC Vodacom MFW campaign is an especially resonant application of this popular form of literature. It will surely make a difference in many women's lives.
6
Score
Popularity
Activity
Freshness