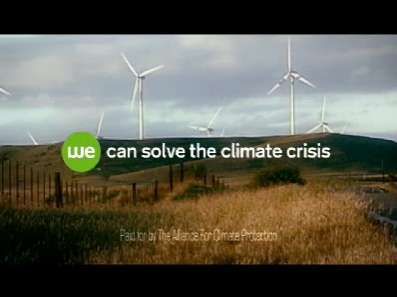 Al Gore's We Can Solve It

Gore's latest step to showing his pledge to stop climate change comes in the form of a $300 billion ad campaign, the first part of which has already been launched on Gore Group's site, wecansolveit.org.

The ad takes a very patriotic angle that Americans will love ("by solving the climate crisis, we are honoring an American tradition") but if Gore wants to tackle global warming, he's going to have to come up with something that speaks to the rest of the world too.

It illustrates that "climate change as the next momentous and culturally-defining quest, occupying the same pantheon as the Normandy Invasion, Civil Rights, and the Apollo missions," according to The Center for Science Writings.

What else will he come up with? With a budget like that, and the ability to reach millions of people around the world, I can't wait to see the impact of his ads!
3.6
Score
Popularity
Activity
Freshness
Get Better and Faster

23 Ads Against Global Warming
Gas Prices Up in Houston, You Can Thank Hurricane Ike