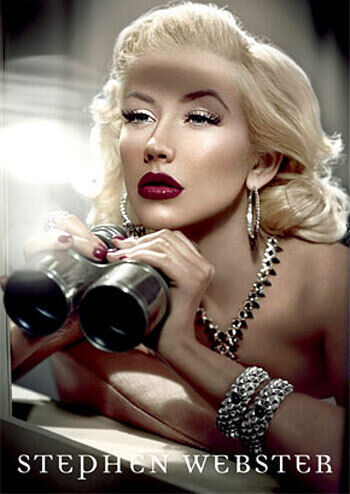 mediterranean — March 5, 2008 — Pop Culture
References: fashion.hollyscoop
Share on Facebook Share on Twitter Share on LinkedIn Share on Pinterest
Alfred Hitchcock has been a constant inspiration in Hollywood lately. Christina Aguilera has been announced as the official new face for London-based jeweler Stephen Webster. She stars in Hitchcock-inspired ads for Webster's Spring 2008 line. Says Webster about his choice of pairing a modern superstar with a film legend, "I have always loved Hitchcock's films and to be able to transport Christina and my jewelry into that classic setting was an amazing experience for me.â€

The new jewelery line, Shattered, features over fifty styles of rings, pendants, cuffs and earrings with gemstones such as jade, hematite, chalcedony, goldstone and white agate inlaid into silver in designs that are inspired by broken stained glass windows in Gothic churches (hence the name, Shattered).