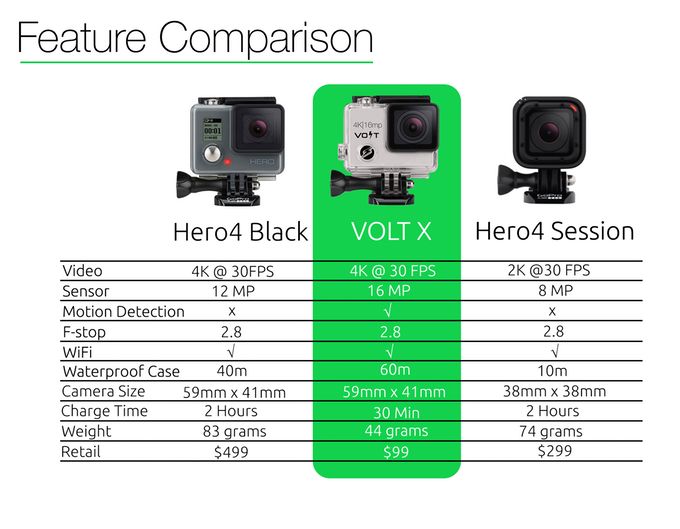 Riley von Niessen — August 14, 2016 — Tech
References: voltcamera & kickstarter
Share on Facebook Share on Twitter Share on LinkedIn Share on Pinterest
'VOLT Camera,' a technology company that's based in Vancouver, British Columbia, aims to create great products that are accessible to everyone -- one of its latest being an affordable camera titled the 'VOLT X' that's able to capture energetic scenes with ease.

Although a fraction of the price of its competitors, the device has similar features to those used by professional action photographers. This includes the ability to record video in "full 4K Ultra-High Definition," a 16 mega pixel sensor and a wide angle view that captures 171 degrees.

In order to bring the affordable cameras to consumers, the company is seeking funding on Kickstarter so that it doesn't have to venture into pricey major retail distribution efforts. In doing so, VOLT Camera is looking to cut out the middle man so that it can cut down on its own costs, meaning that it's still able to profit without hurting the pockets of consumers.
5.1
Score
Popularity
Activity
Freshness
Get Better and Faster