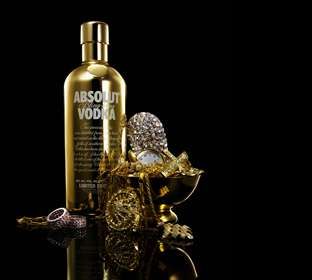 Cowbag — December 21, 2006 — Tech
References: absolut & joshspear
Share on Facebook Share on Twitter Share on LinkedIn Share on Pinterest
According to themselves, sales of Absolut Vodka have increased 14,900% over 15 years - and they have just launched their ninth flavour ABSOLUTE PEAR. Joining Mandrin, Cirton, Peach, Pepper, Kurrant, Rasberri, Rubi Red & Vanilla in the absolute stable its the best by far and perfect for spring. Its well worth the effort trying to find it.

But leaving the flavours aside, its the limited edition Absolute Bling Bling which really rocks. Its a bling bling gift pack, full of sparkly goodies to "dress up" your bottle of vodka. Despite having its own website no one seems to know where to buy it - perhaps that is all part of its appeal & hype.
6.1
Score
Popularity
Activity
Freshness
Attend Future Festival