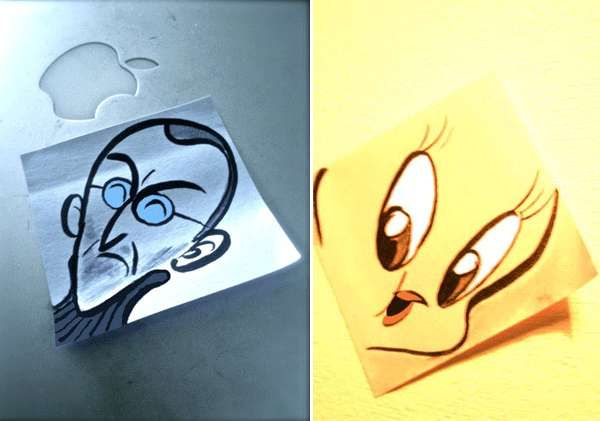 Jason Soy — August 31, 2011 — Pop Culture
References: aaronhartline.blogspot & blog.thaeger
Share on Facebook Share on Twitter Share on LinkedIn Share on Pinterest
Keep your eyes peeled whenever and wherever you're journeying as you may encounter one of these Aaron Hartline Post-It notes with some of these quirky drawings. The project, which Hartline calls 'The Daily Post-it,' has Aaron illustrating images of popular cartoons onto stickies and placing them in the most obscure places in and around his neighborhood in order to add a little joy to lives of people who encounter the images.

Aaron Hartline is an animator for Pixar Animation Studios and a teacher at Animation Mentor, so these doodles probably took him mere seconds to make.

Some characters you may be familiar with in these Aaron Hartline creations include Winnie the Pooh dressed up was Harry Potter, the Comic Book Guy from The Simpsons and Tweety Bird from Looney Tunes.

Implications - Consumers enjoy seeing cartoon characters because of their nostalgia value, reminding consumers of their youth and simpler times. This, in turn, acts as a stress reliever. Corporations may consider using cartoon characters in media campaigns in order to evoke a similar sense of ease and comfort from consumers.
3.6
Score
Popularity
Activity
Freshness
Attend Future Festival