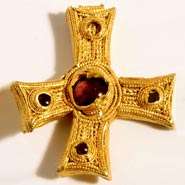 Pearl — August 10, 2008 — Lifestyle
References: telegraph & beadinggem
Share on Facebook Share on Twitter Share on LinkedIn Share on Pinterest
A British metal detector enthusiast recently hit the jackpot when he discovered a 7th century C.E. Anglo-Saxon gold cross in an English field. The 18K gold cross is about one inch wide and is decorated with red gemstones, some of which are missing as is the holy relic which may once have been in its centre.

The unnamed man was required by British law to turn in the cross to authorities. An inquest determined his cross to be a treasure trove which means that once it has been properly valued, he and the landowner will share in the bounty if a museum purchases it. The cross is thought be worth at least £25,000 or $50,000.

Gold prices are shooting through the roof and, to no surprise, treasure hunting with metal detectors is a growing trend. Not all metal detector enthusiasts are after archaeological treasure. Beach combing with such instruments for jewelry lost by careless sunbathers can be very lucrative. One or two good finds will see a return on the investment of the detector which costs about $800 and up.
3.1
Score
Popularity
Activity
Freshness
Get Trend Hunter Dashboard