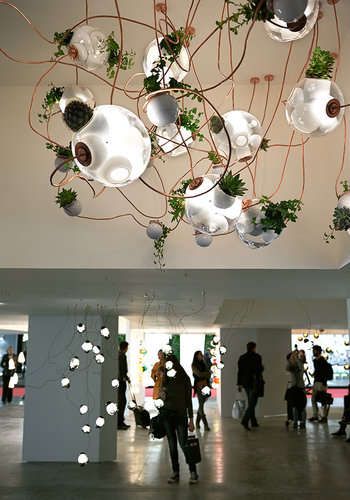 The 38 Series by Omer Arbel is Part Pot, Part Lamp

Meghan Young — May 14, 2013 — Art & Design
References: omerarbel & fastcodesign
Share on Facebook Share on Twitter Share on LinkedIn Share on Pinterest
The 38 Series by Omer Arbel, the creative director of multi-disciplinary design firm Bocci, which is based in Vancouver, British Columbia, is a collection of whimsical light fixtures. As though plucked from the home of a forest nymph, each glass pendant has foliage sprouting from it. That is because they also double as suspended planters. At once refreshing and illuminating, the lights bring a touch of the outdoors inside.

Boasting either four or six cavities, the 38 Series by Omer Arbel divvies them up between the plants and lights. Like small cratered moons, the designs appear to orbit the ceiling. Although otherworldly, they are also beautifully modern in their minimalist aesthetic. Connected in clusters via copper wiring, the 38 Series of lamps will take people's breath away.
3.9
Score
Popularity
Activity
Freshness
Get the 2023 Trend Report FREE