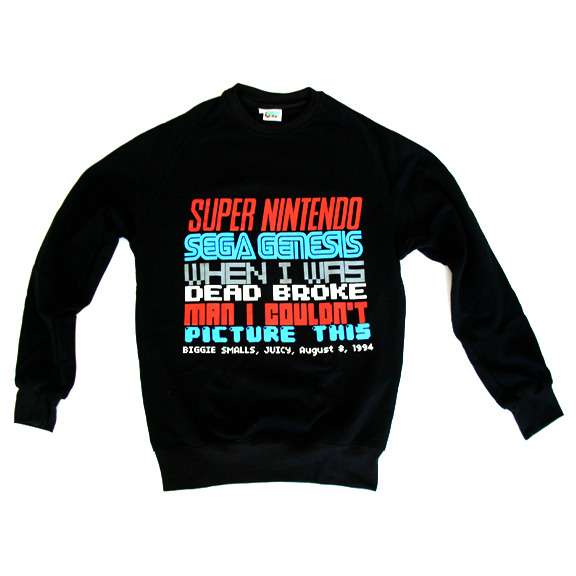 The 2Bop Biggie Smalls Sweat Lets You Relive the 90s

Jason Soy — July 1, 2011 — Fashion
References: twobopaustralia.bigcartel & bbcicecream
Share on Facebook Share on Twitter Share on LinkedIn Share on Pinterest
The 90s were a very culturally significant time period and this 2Bop Biggie Smalls Sweat lets people relive those years through memorable rap lyrics on a spiffy sweatshirt. Not only is the shirt evocative of one of the all-time greatest rappers who ever lived, but the Notorious B.I.G. tribute also references video game systems specific to that glorious era.

The infamous lyrics found on the 2Bop Biggie Smalls Sweat come from B.I.G.'s track 'Juicy' and read,"Super Nintendo, Sega Genesis, when I was dead broke man I couldn't picture this." I never would have pictured it taking 17 years before someone decided to put these lyrics on a sweatshirt, but at least it's here now and it also comes on a t-shirt.

Implications - As consumers are growing older, the demand for nostalgia products increases as the general population reminisce about their youth. Corporations should actively release products which make consumers feel younger in order to capitalize on their desire to never grow old.
3.1
Score
Popularity
Activity
Freshness
Get Trend Hunter Dashboard