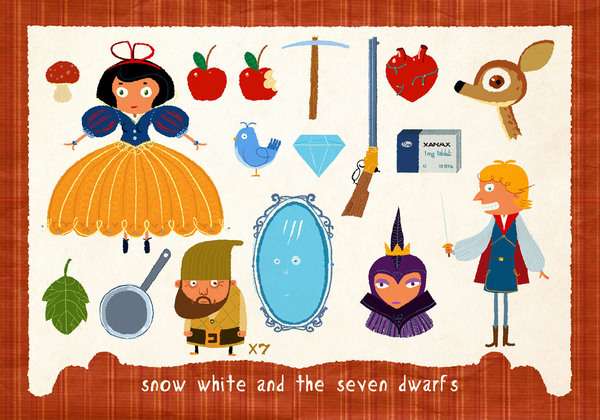 Jason Soy — July 19, 2011 — Pop Culture
References: behance.net & designlov
Share on Facebook Share on Twitter Share on LinkedIn Share on Pinterest
These vibrant ‘12 Famous Fairy Tales in Pieces’ illustrations by Simone Massoni perfectly capture the essence of each story, even though all of the pictures only feature paper doll cutouts of characters and objects from their respective tales. I seriously never considered how important these objects actually were to each narrative until Massoni laid it all out in this wicked format.

The 12 Famous Fairy Tales in Pieces was originally made for a calender and features the classics Snow White and the Seven Dwarfs, Robin Hood, Aladdin, Little Red Riding Hood, Cinderella, Beauty and the Beast, The Little Mermaid, The Frog Prince, The Three Little Pigs and others.

Implications - North American consumers have grown tired of computer-generated graphics which have over saturated the marketplace. Corporations looking to garner the attention of consumers should instead try utilizing fine arts illustrations such as these in promotional campaigns as they’re a more favorable alternative to computer graphics.
3.1
Score
Popularity
Activity
Freshness
Jeremy Gutsche Keynote Speaker