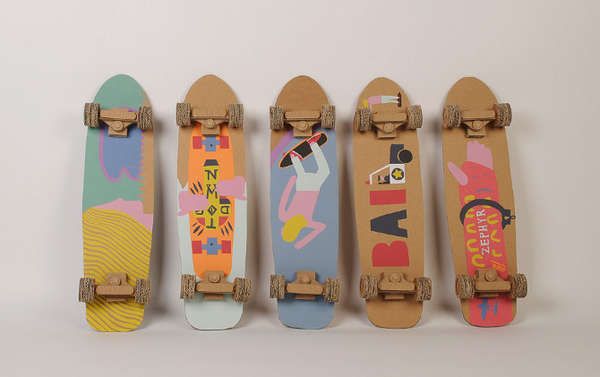 Meghan Young — April 19, 2013 — Eco
References: dominic-owen & coolhunting
Share on Facebook Share on Twitter Share on LinkedIn Share on Pinterest
The Z-Boys by Dominic Owen, a freelance Illustrator living in London, England, is a tribute to legendary group, Zephyr Competition Team, who were more commonly known as the Z-Boys. They revolutionized the sport of skateboarding as people know it today during the mid-1970s in Santa Monica and Venice, California. Inspired by the personalities of the original members, the artist has crafted five of the 12 skaters thus far.

Made out of cardboard, Z-Boys by Dominic Owen was part of a project produced during his last year at University. Perfectly scaled to real-life boards and finished with cardboard trucks, risers and wheels, the bellies of each one was individually collaged by hand. The artworks may be minimalist and childlike, but that is where the true charm lays.
3.2
Score
Popularity
Activity
Freshness
View Innovation Webinars