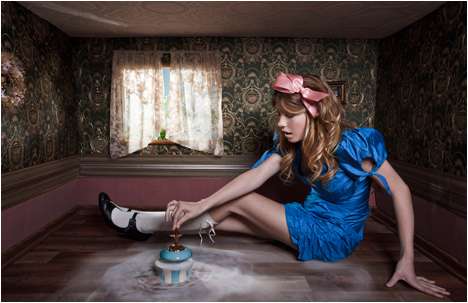 The Yifat Vernchik Alice in Wonderland Series is Dreamlike

Corinne Guirgis — June 30, 2011 — Fashion
References: thephotographylink & designbreakonline
Share on Facebook Share on Twitter Share on LinkedIn Share on Pinterest
The Yifat Vernchik Alice in Wonderland editorial is fun, playful and childlike, while accurately capturing the imagery and characters of the famed fairytale. The fantastical imagery inspired by the imagination-infused world of Alice in Wonderland is infinite. While this photo series fits into the endless array of artworks inspired by the film, its staging and styling brings a fresh perspective to the popular story and, in some ways, tells a story of its own.

The shoot was not a solo project for Vernchik, whose husband Dan Peretz is a celebrated still-life photographer who co-shot the Wonderland editorial. What adds to the brilliance behind the shoot is model Anastasia Tal who captures the essence of Alice's character through her facial expressions and movement.

Implications - The influence of certain characters and storylines in film and television extends far beyond the screen and into the consumer world. Photographers, artists, fashion designers and even restaurants and interior decorators are inspired by these iconic films whose imagery is memorable and aesthetically appealing to audiences. The use of these cinematic aesthetics and design concepts in consumer goods and services is attributable to the mass critical acclaim and public buzz these films generate, which business owners hope these numbers will translate into massive sales.
6.8
Score
Popularity
Activity
Freshness
View Innovation Webinars