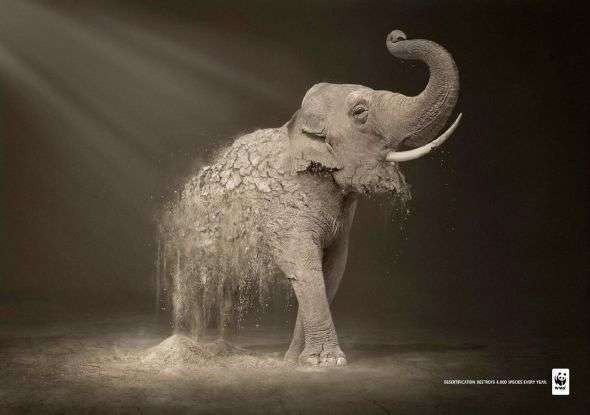 Amelia Roblin — December 2, 2011 — Eco
References: contrapunto.es & adsoftheworld
Share on Facebook Share on Twitter Share on LinkedIn Share on Pinterest
Many people remain ignorant to the fact that the planet is undergoing extreme climactic changes and that such rapid transformations negatively impact the creatures that have grown accustomed to their environments. This WWF Desertification campaign highlights one major problem, the endangerment of species, and its cause which exists as an ever perturbing problem.

The three prints by the Contrapunto BBDO agency of Madrid, Spain, state that "Desertification destroys 6,000 species every year." Clever imagery was chosen to visually depict this idea, in which photographic editing techniques turn elephants, leopards and parrots into deteriorating clouds of dust, reminiscent of the dry and eroded floor of arid landscapes. Awareness is brought to this issue through the WWF Desertification campaign in order to curb society's destructive practices and promote support for animal populations at risk through the World Wildlife Fund.
6
Score
Popularity
Activity
Freshness
Get Trend Hunter Dashboard