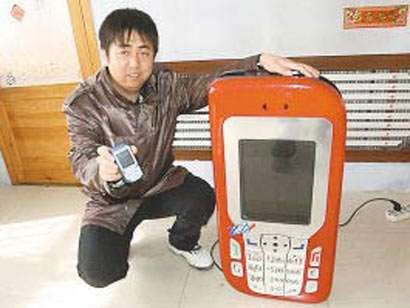 It took him six months to build the 3ft high phone, which weighs about 48lbs. It is an exact copy of his own phone that is 620 times bigger.

He incorporated all the features of his mobile into the bigger model, "The only other difference is that I didn't incorporate the vibrate function," he said.

Implications - Although this cell phone may be a whopping 3 feet long, it still has to be plugged into an electrical source to charge its battery. However, the phone certainly can be used to text and call, which makes it super fun and functional!
1.3
Score
Popularity
Activity
Freshness
View Innovation Webinars

54 Gigantovations
Oversized Things, From XXL Critters to the Nazareth Cross