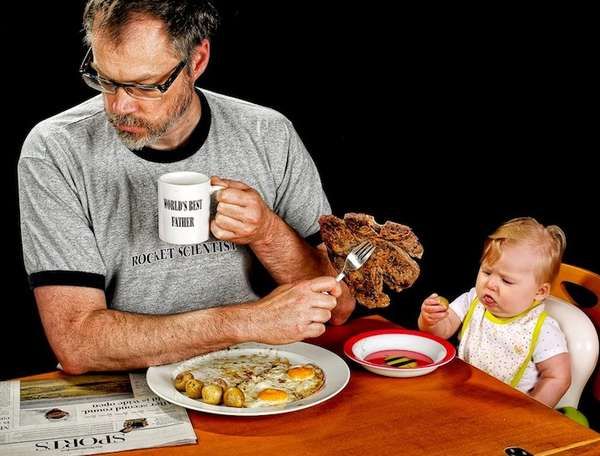 World's Best Father by Dave Engledow is Quite the Opposite

Meghan Young — September 25, 2012 — Fashion
References: 1x & neatorama
Share on Facebook Share on Twitter Share on LinkedIn Share on Pinterest
It takes a lot to live up to the self-professed title of World's Best Father, but photographer Dave Engledow has taken to it like a kid in a candy shop. He has even gone as far as to document his success in the parenting field. Posing alongside his adorable two-year-old, he shows his audience exactly why he deserves this most cherished of titles. Or more like why he doesn't.

The World's Best Father photo series captures the DC-based dad as he hilariously interacts with his daughter, all the while drinking from his 'World's Best Father' mug. From ignoring her cries to read 'Twilight' to inappropriate arm wrestling matches, this dad is not necessarily an exemplary figure for men to follow. The comical scenes are meant to showcase the "dazed, sleep-deprived, oblivious" new father and "clueless dad," as stated by the photographer.
6.9
Score
Popularity
Activity
Freshness
Get Better and Faster