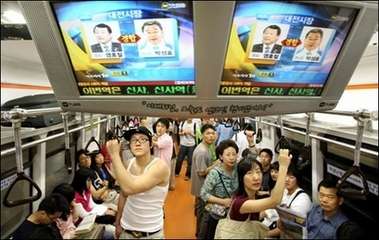 Alex Covert — November 1, 2007 — Autos
References: news.au
In an effort to curb sexual harassment, a South Korea subway line is offering women-only rides in the capital city of Seoul. Two cars from each train will block male riders. Apparently, Seoul has a groping-male problem. The city introduced this same idea back in 1992 but, shut it down due to "structural problems in operations."

Implications - Public transit has taken great care in providing great service to commuters and now, it's taking that one step further with safety. The addition of female-only trains shows that transit companies know their customers well enough to find more ways to make things easier. With additional security, it'd be interesting to see how transportation grows in catering to a population that demands nothing but the best.
5.1
Score
Popularity
Activity
Freshness