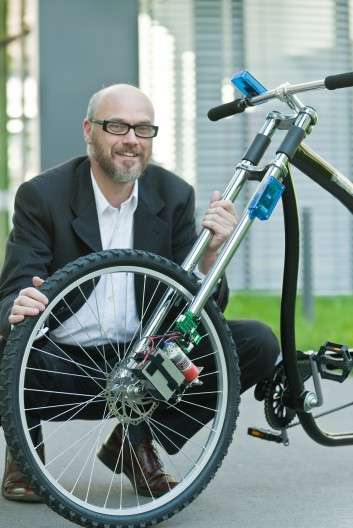 Meghan Young — October 17, 2011 — Autos
References: alphagalileo.org & ohgizmo
Share on Facebook Share on Twitter Share on LinkedIn Share on Pinterest
As bicycles increasingly become a go-to commuter choice for people around the world, designers and even researchers are looking for ways to revolutionize them as much as others do with cars; enter the wireless bicycle brake. Researchers at the Saarland University in Germany, led by Professor Holger Hermanns, have developed a pressure sensor system that replaces the traditional break bars used on bikes.

Although wireless gear systems are nothing new, this wireless bicycle brake offers something that they don't: 99.999999999997% reliability. That means it will fail only three times out of a trillion (yes, trillion) breaking attempts. Those other faulty systems cannot guarantee that level of safety. Nevertheless, improvements are still being made. For instance, a cycler must react at least 2 meters before the point of completely stopping. Instead, stopping should be more immediate.
4.2
Score
Popularity
Activity
Freshness
Get Trend Hunter Dashboard