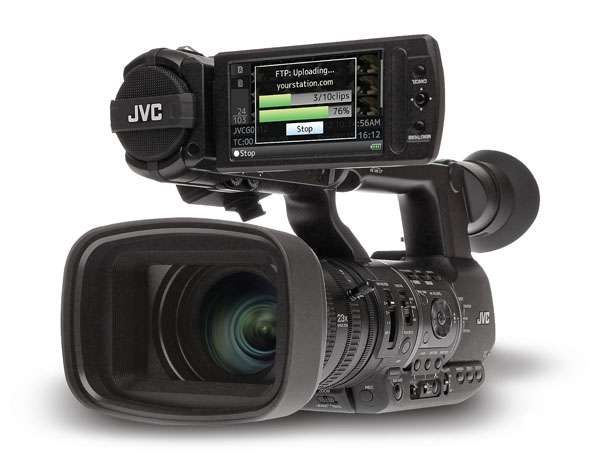 Calan Panchoo — April 18, 2012 — Tech
References: pro.jvc & engadget
Share on Facebook Share on Twitter Share on LinkedIn Share on Pinterest
The days of journalists arriving at news scenes with a white van full of electronics seems to have met their match in a Wifi-equipped video camera. The new JVC GY-HM650 incorporates all the abilities of a normal, professional video camera, but also features WiFi and FTP server support. This means that instead of needing any kind of satellite dish to send footage back to the news studio, the camera will do it for you.

Aside from being able to connect to the Internet at the user's whimsy, it also features all the regular high quality features, such as three 1080p 12-bit sensors, a 29-66mm lens, a 3.5 inch LCD screen, and HD-SDI outputs. It also has a headphone jack, can hold up a microphone, can connect to a wireless microphone receiver, and it even features a GPS as well as Android and iOS app support.

Despite all of its features it is still fairly compact, able to be held and used by one person. The price, however, is not so compact, as grabbing one of these bad boys will run you $5,695. Considering everything it can do though, that might not be so bad.
3.2
Score
Popularity
Activity
Freshness
Get the 2023 Trend Report FREE