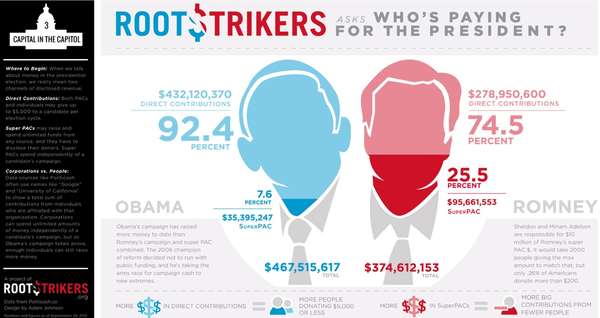 The 'Who's Paying for the President?' Infographic Compiles Donation Data

Jennifer Gosnell — December 24, 2012 — Pop Culture
References: awesome.good.is
It should come as no surprise to the American public that many millions of dollars worth of campaign contributions were made to both Mitt Romney and Barack Obama's respective campaigns, as compiled by the 'Who's Paying for the President' infographic. The historic donations have totalled more than ever before in the cut-throat race that declared Barack Obama it's victor.

The interesting shift in public donations is captured in the 'Who's Paying for the President' infographic. One of the interesting statistics to come out of the November election, and a shift we are sure to see in the 2016 election, was the number of small donors to the Democratic campaign. The Republican ticket scored the larger gifts, but the makeup of the smaller donations is what ultimately pushed the Obama budget well over 100 million dollars ahead of the Romney campaign.

The fundraising tactics to be used in the 2016 election are sure to build off of the groundbreaking 2012 race.
1.8
Score
Popularity
Activity
Freshness