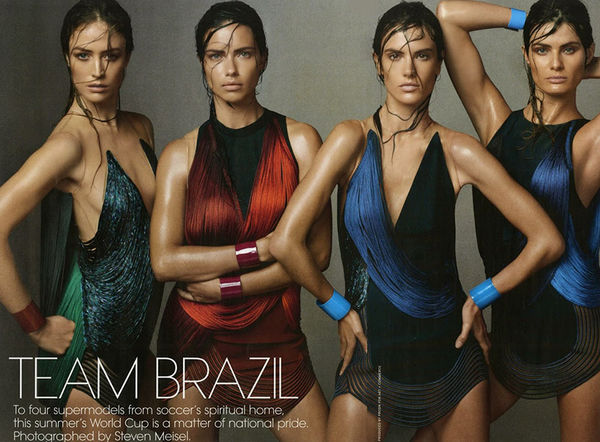 Meghan Young — May 22, 2014 — Fashion
References: vogue & fashiongonerogue
Share on Facebook Share on Twitter Share on LinkedIn Share on Pinterest
The Vogue US 'Team Brazil' editorial is one way to celebrate the upcoming World Cup series, which will be hosted in Brazil next month. Instead of focusing on the hot Brazilian soccer team itself, it pulls together four of the world's top Brazilian models in the industry: Adriana Lima, Raquel Zimmermann, Alessandra Ambrosio and Isabeli Fontana. Sexy and sweaty, some men might prefer to see them running around the field instead.

Shot by photographer Steven Meisel, the Vogue US 'Team Brazil' editorial appropriately appears on the June 2014 issue of the American publication. All of the bronzed beauties are clad in matching Stella McCartney dresses as well as Alexis Bitter cuffs. About the sport itself, Isabeli Fontana tells the magazine, “The sport is such an expression of our love and culture."
5.8
Score
Popularity
Activity
Freshness
Get Trend Hunter Dashboard