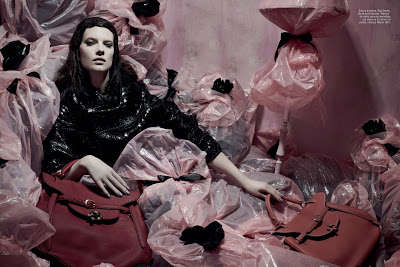 Jordy E — March 22, 2013 — Pop Culture
References: vogue.it & mode.newslicious.net
The Vogue Italia Close Up editorial displays a series of cramped rooms. As these spaces are stacked with garbage bags, clothing and newspapers, they are largely reminiscent of hoarding scenes.

This backdrop breaks with the rest. Model Querelle Jansen took over the space with ease however, as was captured by photographer David Dunan. Dunan's images revealed a sprawled Janson who laid out amid the stacks of paper, certainly a far cry from the prototypical images of high end fashion. Stylist Valentina Serra assured just the opposite however with her assortment of oversize purses, professional womenswear and couture dresses. This artistic set is currently being showcased in the March 2013 issue of Vogue Italia, setting a creative tone for the magazine.
3.6
Score
Popularity
Activity
Freshness