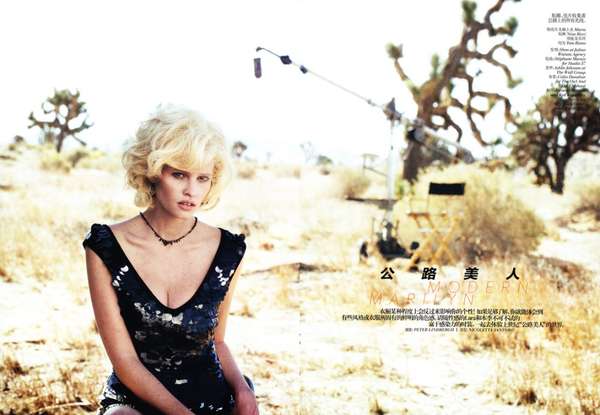 Meghan Young — January 4, 2012 — Fashion
References: vogue.cn & fashiongonerogue
The Vogue China 'Modern Marilyn' editorial is sultry and amorous. Even if it weren't named after the iconic blonde bombshell that continues to steal the hearts of many, the signature platinum bob would have inspired a lot of comparisons. Instead of taking place on a typical Hollywood set, however, this photo shoot was shot in what appears to be a Texan desert. It sets a great Western tone, no matter how unexpected the surroundings may be.

The Vogue China Modern Marilyn editorial was captured by fashion photographer Peter Lindbergh for the magazine's January 2012 issue. It stars model Lara Stone alongside actor Fred Ward. The cinematic shots are made glamorous through the use of form-fitting dresses and lingerie put together by fashion editor Nicoletta Santoro, who pulled designs from Marni, Miu Miu and Nina Ricci.
2.7
Score
Popularity
Activity
Freshness